Our Book Recommendations #3
The Mind.

The Inward Journey to Find Self-Awareness.

Together, these books are selling over 9,800 copies per month. The theme of these books is related to the power of consciousness and the inward journey all of us must undertake to discover who we really are.

Our featured Bonus Book for August 2018 is a HIDDEN GEM: Aligned, Relaxed, Resilient The Physical Foundations of Mindfulness by Will Johnson. The concepts and practices of Embodied Mindfulness are delivered in an easily readable, jam-packed instruction guide filled with breath and body practices from around the world and across the centuries. This is a hidden gem worth knowing about! 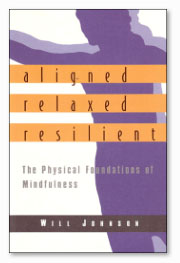 Until we have time to provide our own review on each book, below is the information from each book’s inside or back cover, along with sales ratings from Amazon.com (and corresponding links to the books on Amazon – with no current sales affiliations).

It goes without saying that our book recommendations are a small sampling from many sources of bodymind or mind-body concepts. Here are the top five books by sales, as recommended by a selection of self-healing books from TheBodyIsMind library. All sales rankings as listed were accurate as 2018 when this research was done.

The Journey Beyond Yourself 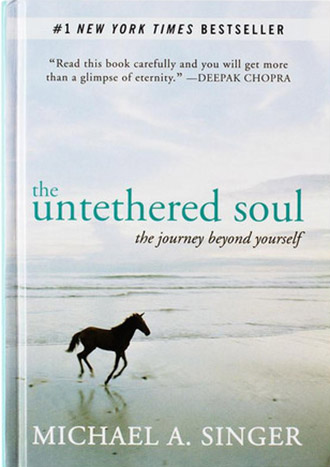 What would it be like to free yourself from limitations and soar beyond your boundaries? What can you do each day to discover inner peace and serenity? The Untethered Soul—now a #1New York Times bestseller—offers simple yet profound answers to these questions.

Whether this is your first exploration of inner space, or you’ve devoted your life to the inward journey, this book will transform your relationship with yourself and the world around you. You’ll discover what you can do to put an end to the habitual thoughts and emotions that limit your consciousness. By tapping into traditions of meditation and mindfulness, author and spiritual teacher Michael A. Singer shows how the development of consciousness can enable us all to dwell in the present moment and let go of painful thoughts and memories that keep us from achieving happiness and self-realization.

Copublished with the Institute of Noetic Sciences (IONS) The Untethered Soul begins by walking you through your relationship with your thoughts and emotions, helping you uncover the source and fluctuations of your inner energy. It then delves into what you can do to free yourself from the habitual thoughts, emotions, and energy patterns that limit your consciousness. Finally, with perfect clarity, this book opens the door to a life lived in the freedom of your innermost being.

The Untethered Soul has already touched the lives of countless readers and is now available in a special hardcover gift edition with ribbon bookmark—the perfect gift for yourself, a loved one, or anyone who wants a keepsake edition of this remarkable book. 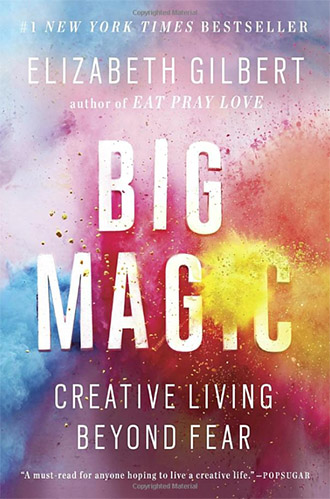 “A must-read for anyone hoping to live a creative life… I dare you not to be inspired to be brave, to be free, and to be curious.” —PopSugar

From the worldwide bestselling author of Eat Pray Love: the path to the vibrant, fulfilling life you’ve dreamed of.

Readers of all ages and walks of life have drawn inspiration and empowerment from Elizabeth Gilbert’s books for years. Now, this beloved author digs deep into her own generative process to share her wisdom and unique perspective about creativity. With profound empathy and radiant generosity, she offers potent insights into the mysterious nature of inspiration. She asks us to embrace our curiosity and let go of needless suffering. She shows us how to tackle what we most love, and how to face down what we most fear. She discusses the attitudes, approaches, and habits we need in order to live our most creative lives. Balancing between soulful spirituality and cheerful pragmatism, Gilbert encourages us to uncover the “strange jewels” that are hidden within each of us. Whether we are looking to write a book, make art, find new ways to address challenges in our work, embark on a dream long deferred, or simply infuse our everyday lives with more mindfulness and passion, Big Magic cracks open a world of wonder and joy.

The Astonishing Science of How Your Brain Creates Material Reality 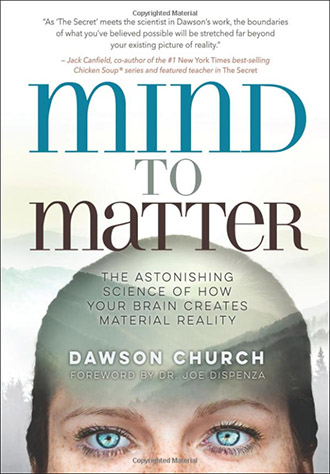 Every creation begins as a thought, from a symphony to a marriage to an ice cream cone to a rocket launch. When we have an intention, a complex chain of events begins in our brains. Thoughts travel as electrical impulses along neural pathways. When neurons fire together they wire together, creating electromagnetic fields. These fields are invisible energy, yet they influence the molecules of matter around us the way a magnet organizes iron filings. In Mind to Matter, award-winning researcher Dawson Church explains the science showing how our minds create matter. Different intentions produce different fields and different material creations. The thoughts and energy fields we cultivate in our minds condition the atoms and molecules around us. We can now trace the science behind each link in chain from thought to thing, showing the surprising ways in which our intentions create the material world. The science in the book is illustrated by many authentic case histories of people who harnessed the extraordinary power of the mind to create. They include:

In Mind to Matter, Dawson Church shows that these outcomes aren’t a lucky accident only a few people experience. Neuroscientists have measured a specific brain wave formula that is linked to manifestation. This “flow state” can be learned and applied by anyone. New discoveries in epigenetics, neuroscience, electromagnetism, psychology, vibration, and quantum physics connect each step in the process by which mind creates matter. They show that the whole universe is self-organizing, and when our minds are in a state of flow, they coordinate with nature’s emergent intelligence to produce synchronous outcomes.

The book contained over 150 photos and illustrations that explain the process, while an “Extended Play” section at the end of each chapter provides additional resources. As Mind to Matter drops each piece of the scientific puzzle into place, it leaves us with a profound understanding of the enormous creative potential of our minds. It also gives us a road map to cultivating these remarkable brain states in our daily lives.

Out of Your Mind

Tricksters, Interdependence, and the Cosmic Game of Hide and Seek 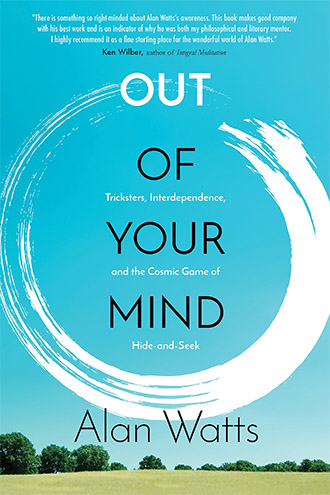 In order to come to your senses, Alan Watts often said, you sometimes need to go out of your mind. Perhaps more than any other teacher in the West, this celebrated author, former Anglican priest, and self-described spiritual entertainer was responsible for igniting the passion of countless wisdom seekers to the spiritual and philosophical delights of India, China, and Japan.

With Out of Your Mind, you are invited to immerse yourself in six of this legendary thinker’s most engaging teachings on how to break through the limits of the rational mind and expand your awareness and appreciation for the great game unfolding all around us. Distilled from Alan Watts’s pinnacle lectures, Out of Your Mind brings you an inspiring new resource that captures the true scope of this brilliant teacher in action.

For those both new and familiar with Watts, this book invites us to delve into his favorite pathways out of the trap of conventional awareness, including: 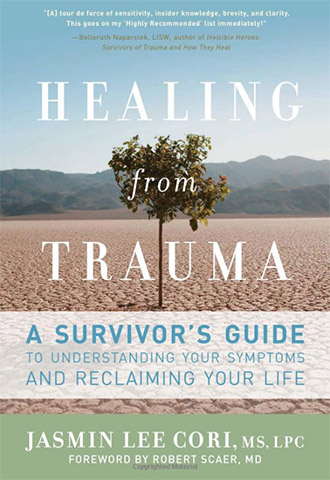 While there are many different approaches to healing trauma, few offer a wide range of perspectives and options. With innovative insight into trauma-related difficulties, Jasmin Lee Cori helps you: Understand trauma and its devastating impacts Identify symptoms of trauma (dissociation, numbing, etc.) and common mental health problems that stem from trauma Manage traumatic reactions and memories Create a more balanced life that supports your recovery Choose appropriate interventions (therapies, self-help groups, medications and alternatives) Recognize how far you’ve come in your healing and what you need to keep growing Complete with exercises, healing stories, points to remember, and resources, this is a perfect companion for anyone seeking to reclaim their life from the devastating impacts of trauma.

The Physical Foundations of Mindfulness 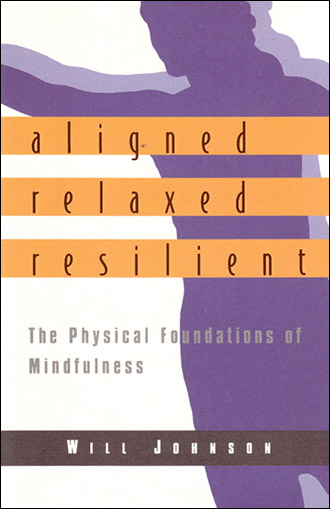 Don’t let the sales on this hidden gem of a classic fool you! This book is friendly, easily digestible in bite-size chunks, gives you something to ponder in every paragraph, and provides tools you can immediately use in your life. Use the golden wisdom nuggets in this perfect paperback to find relief from chronic pain, anxiety, and discover inner blissfulness. Will Johnson hits a home run in the genre of Self Awareness with this candid condensation of cross-generational, inter-cultural bodymind practices. More specifically, Johnson describes how it really feels to have an inner awareness of your body and breath you while you practice ancient bodymind movements. Truly an inspirational hidden gem worth picking up for yourself! – TheBodyIsMind.com Review

The emphasis on the mind in meditation can be somewhat misleading: If we pay attention only to mental processes and overlook the experience of the body, we can remain stuck in our heads and not be able to break free of the involuntary thinking that we find so claustrophobic and toxic. This short, practical guide helps us embrace the fact of our embodiment—the experience of the sensations, movements, and gestures of the body—and to realize that mindfulness is the natural state of awareness of a body that has learned how to experience its feeling presence. Johnson takes us through the three primary principles of the posture of meditation: alignment, relaxation, and resilience. He devotes a large part of each chapter to specific practices to help the reader experience different aspects of physical presence. This book is of interest to meditators of all traditions—Buddhists, Hindus, Christians, Jews, and others—as well as therapists, bodyworkers, and anyone interested in body-centered psychology and other natural modes of healing.

8 Ways To Find Bliss Without Opioids or Surgery

Take a Binaural Train Journey Through the I70 Corridor and Wind Down Your B...
Scroll to top